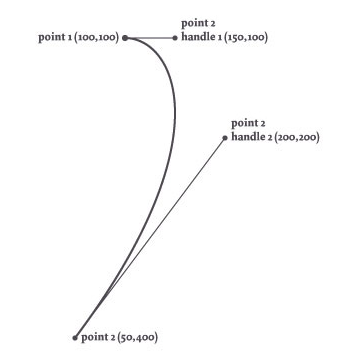 By default, the path would be filled black and drawn without a stroke color. The fill and stroke arguments override these to give us just the line itself.

Note that the initial point (100,100) is set as part of the bezier() call, while the destination point is the final pair of args passed to curveto(). Whenever you call any of the ‘to’ commands – lineto(), arcto(), or curveto() – it implicitly uses the Bezier’s ‘current pen position’ as the starting point for the next line segment.

Bezier objects give you access to all the points in a path as well as their control handles. This allows you to transform paths on the fly and even manipulate type (using the textpath() comand). Additionally, you can unite and intersect different paths or perform a variety of math operations (e.g., calculating the x and y coordinates of a point halfway down the path).

Paths are iterable lists of Curves

Each of the PlotDevice shape commands (arc(), poly(), etc.) returns a Bezier object. This object is a list-like sequence of Curve objects that you can iterate over. Using the Curve’s properties, you can retrieve or edit the path’s vertices, control handles, and command-types (straight line, curve, move-pen, or close).

Each element in the path is a Curve object with the following attributes:

the horizontal and vertical location (as floating point numbers).

the type of line segment, either LINETO, CURVETO, MOVETO or CLOSE

If curve.cmd is CURVETO, a pair of ‘control handles’ will also be defined. Each control handle is a simple Point object with x and y attributes:

the location of the first control handle

the location of the second control handle 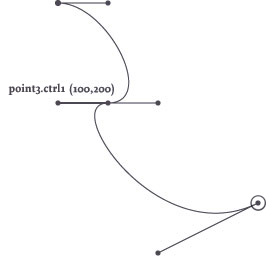 This is the path returned from the textpath() command for the character e in the Dolly typeface. Superimposed are its curves’ control points: 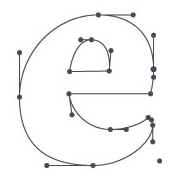 This is the same path, but modified. The location of each curve’s (x,y) point is translated downwards: 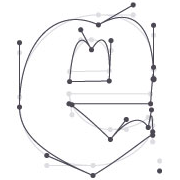 As you can see, it’s easy to manipulate a path by looping through all of its Curves in a for-loop before actually drawing the path. Note that modifying the Curve objects in the for-loop does not affect the original path. Instead we’re saving the modified Curves and using them to generate a brand new Bezier in the final line.

We don’t have to limit ourselves to messing with the point coordinates either. Here we use a similar loop to modify the path’s control handles, letting each curving point ‘droop’ a bit (let’s hope the guys at Underware don’t freak when they see what happened their beautiful typeface):

With some slightly more advanced math we could create a handwritten variation of the text, or one in which each character looks a little different every time it’s drawn. The examples in the Path Filters chapter should give you an idea of what’s possible.

Each of the Curves that makes up a Bezier path has a starting point, an ending point, and control handles. What if we want to know the location of a point on the path that is not one of these endpoints, but somewhere in between? What is the location of the midpoint of an arc for example? The Bezier object has some interesting methods we can use to answer these questions:

Returns a single Point located at a relative distance along the bezier. The t argument should be a value between 0.0 and 1.0 representing the ‘time’ on the path.

Inserts a new Point at relative-distance t into the path.

A path also has the following properties:

The total length of the path (e.g., the circumference when the bezier is circular).

A list of separate ‘sub-paths’ in the path (each represented as a distinct Bezier object). Sub-paths occur when one or more CLOSE Curves are found in a path.

These speed-optimized commands are extremely useful when calculating orbits of animated elements moving down an invisible path in an animation, when creating custom type like the LetterKnitter, when growing cilia on shapes, and so on.

A special thanks goes to professor F. De Smedt at the Free University of Brussels for his integration and interpolation routines (see also: de Casteljau’s algorithm).

Finding points on a path

The example below is an illustration of how points on a path can be found with t (a number between 0.0 and 1.0) representing ‘time’ on the path. When t is 0.5, this means halfway down the path. The path’s origin is at 0 and its end is at 1. 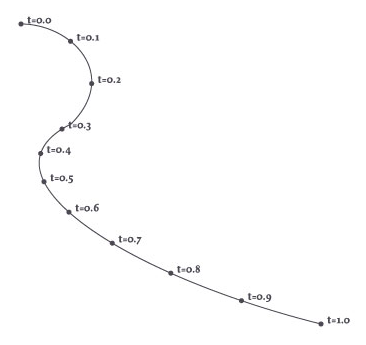 And it’s even easier using the path’s points() method:

Inserting points on a path

Injecting new points into the path is equally easy; just specify the t value where you’d like to create a new vertex. Note that this won’t change the shape of the bezier, it just changes the number of elements you’ll encounter when iterating through the path: 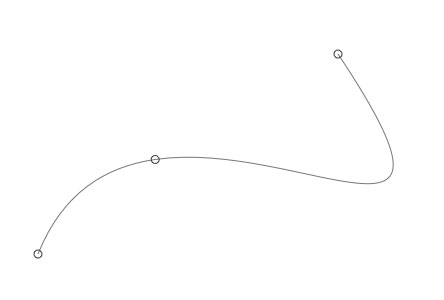 So far we’ve talked about paths being sequences of segments: two points and the curve in between. A group of segments that has a beginning and an ending (or is ‘closed’) is called a sub-path or contour. Character glyphs are often a composite of two contours (for example, the inner and outer oval of the character ‘o’). In typography it’s often useful to get the separate contours.

But contours aren’t limited to type. You can create your own compound paths by calling the shape primitives within a bezier() block. Rather than being drawn independently, drawing operations within the block are added to the bezier.

When the bezier is finally drawn (at the end of the indented block), all the curves will have the same fill and stroke and the path will be rendered in a single operation. You’ll often find it more efficient to group similarly-styled shapes into a bezier rather than drawing each separately.

Note how when the lines are grouped into a single Bezier, their translucent strokes no longer ‘overlap’: 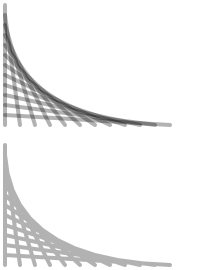 You can group more than simple lines into a path. In fact, you can call any of the shape-drawing primitives as well as the text() command inside a bezier() block and they’ll be added as sub-paths rather than immediately drawn to the canvas: 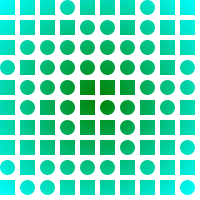 Paths can be combined using boolean set operations. This means you can create a new compound path from a combination of other paths. This is useful if you want to create a shape from a mixture of other shapes (like ovals and rectangles) and then flatten the group into a single path (with no overlaps). Manipulating a single shape is both faster and easier than manipulating a group of shapes.

Each of the following methods returns a new Bezier created by merging the two given paths. The manner in which the new path is traced differs for each method:

Traces and merges the two paths, removing any overlapping parts.

Traces the overlapping region and removes everything else.

Subtracts the second shape from the first shape.

The returned path can be manipulated like any other Bezier. You can fill() and stroke() it, rotate() it then draw it (or multiple copies of it) onscreen by passing it to bezier().

One thing to note is that the compound path will not contain any curves. Instead, it is made up of numerous straight line segments (which is why we say the path has been ‘flattened’). Each of the compound methods has an optional flatness parameter. The lower it gets, the more line segments will be drawn (and hence the smoother the resulting shape).

Using a for-loop we can repeatedly create new sub-paths to build up a compound path. In the example below, we create a number of circles varying in size, then append them to one flattened compound path: 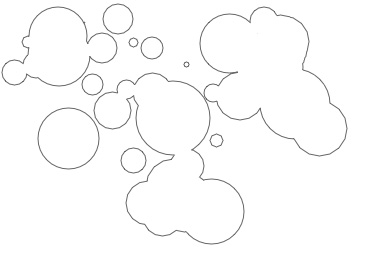 It’s easy enough to draw transformed and colored copies of the compound path, but what if we want to rotate and scale the individual shapes before flattening them? We can use the Transform object for this purpose. 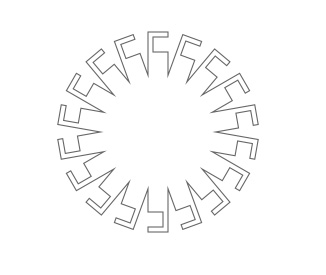 Try adjusting the number of iterations through the for-loop to see where our wheel-like final shape comes from.

Paths can be forced to fit a bounding box. Then as the size of the box is adjusted the path will stretch accordingly. This ‘reverse’ logic is useful in situations where a path needs to exactly fit an area and we don’t want to be bothered with creating the shape in exactly the right proportions or at the right position.

Modifies the path to fit within the specified constraints.

All of the parameters are optional so you can define any combination of them: