A variable is a place to store a value in computer memory. You could think of a variable as a cardboard box. You can put an object inside the box, shove the box into a closet, then eventually dig it out again and retrieve the item. Usually, people put a label or other kind of marker on the outside of the box to remember what’s inside.

Variables work the same way: each variable has a name and a value. The name is like the label on a box – a shorthand reminder of what the variable ‘contains’. The value can be any piece of information your PlotDevice script needs to remember: an important number, a piece of text, a list of colors, and so on.

Each script has its own memory storage for variables – a private warehouse of boxed-up values and labels. The specific value of a variable is therefore only known inside the script where it is used, not in other scripts.

You store things in variables when you plan to reuse them. If you’re going to draw a dozen rectangles where each one is a hundred pixels wide, it’s a good idea to declare a width variable that stores the number 100. You can then the rectangles look at what’s inside the width variable (rather than typing the same magic number in every call to the rect() command).

This way, when you change your mind about the rectangles’ width, you only need to change the contents of the variable, since each rectangle is looking there for its width. This is an example of indirection, a key concept in computer science.

You can create a new variable at any point in your script and give it any name you like, though you should try to stay away from names that PlotDevice has already claimed (like rect, or for). It’s best to pick a name that tells you something about the kind of information the variable is storing.

Try to come up with short, descriptive names. No one is happy about having to type theWidthOfAllTheRectangles dozens of times; especially when a simple name like width says enough.

Once you’ve chosen a name you can ‘assign’ any value you like to it with the ‘=’ operator. You can then use the variable as a stand-in for the value when calling commands:

When you declare a new variable, PlotDevice sets aside a metaphorical storage box with a label to remind itself which variable ‘contains’ the new value.

You can change the value of a variable over the course of a script. When this happens, the old value is thrown away and the variable now contains the new value. 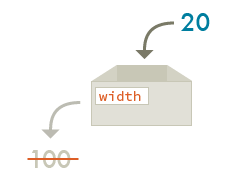 The first rectangle is drawn when the width value is 100. We then change width to 20 and draw two more rectangles (which use the newly-set value).

When you store numbers in variables you can perform calculations as though the variable were the actual number. To perform basic ‘calculator arithmetic’, you can use the +, -, *, and / operators. You can also assign a new value that’s based on the variable’s current value by using one of the augmented assignment operators: 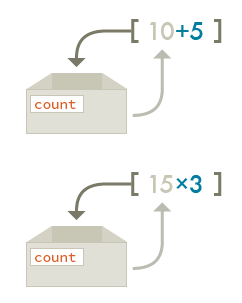 PlotDevice has a set of predefined variables that contain information about the state of your script. These variables can only be looked at, not modified.

Other variables can be used to create interactive animations:

You can see the full list of global variables PlotDevice maintains for you in the reference section on Constants.

The variables panel displays script variables visually as sliders, fields, or check boxes. When you drag a variable’s slider, its value changes on the fly and will affect the output in the drawing area. 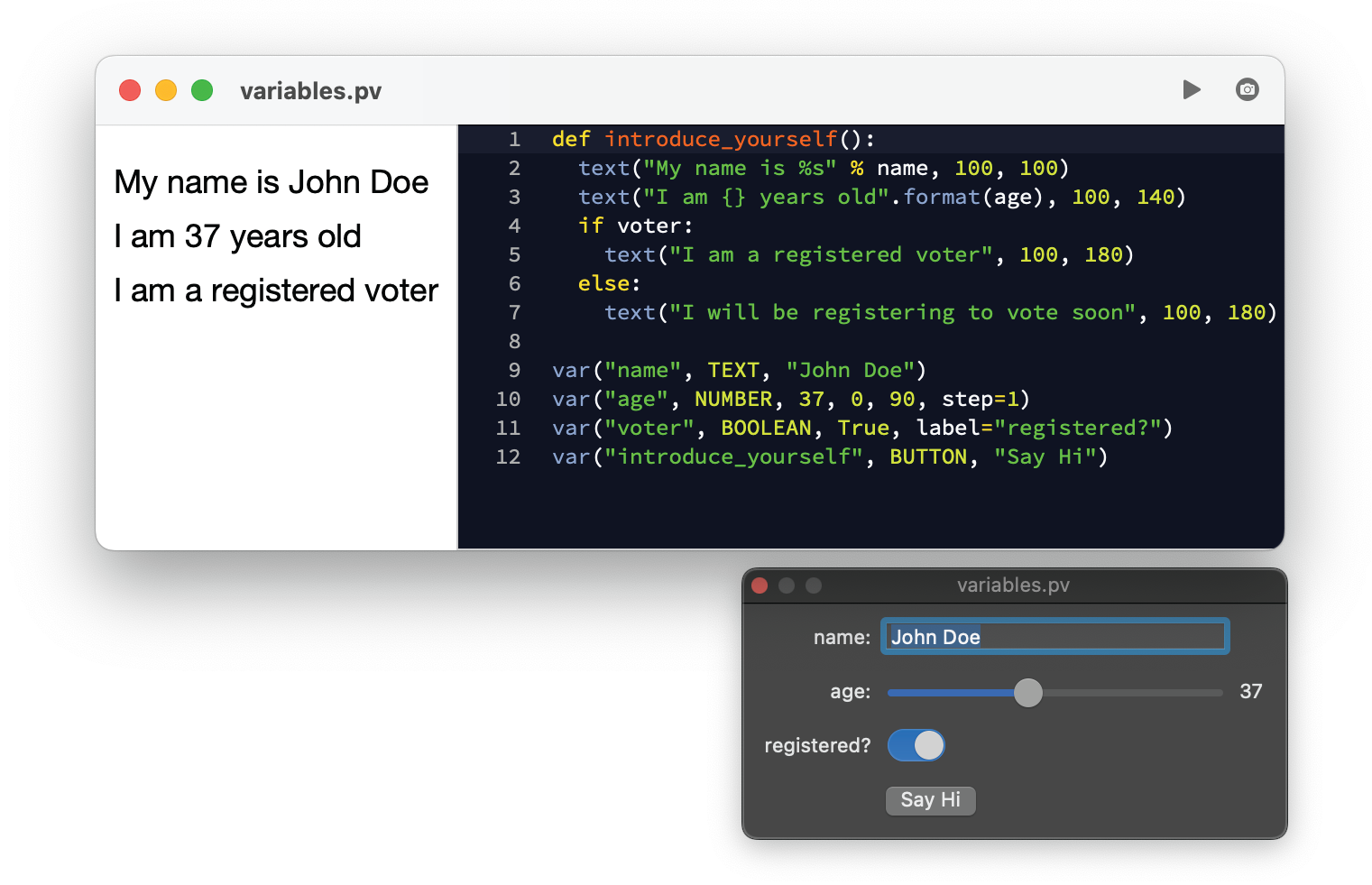 You can add user-controlled variables to the panel with the var() command.

You can then use the name variable in your script like any other variable. Numbers produce a slider, text an input field and booleans (True or False) a checkbox. The command parameter for buttons is the name of a command in your script to call when the button is pressed.

The variable panel is modeled on Bob Ippolito’s widget drawer in the original DrawBot.